Like so many other districts today, the West Ada School District in Idaho takes a varied approach to technology planning and investments. In addition to ramping up with new devices for mobile and one-to-one use, the district has continued to use desktop computer labs as part of its instructional program.

The challenge: teachers and students were frustrated by how long it took the desktop computers in the labs to boot up.  “We felt we had really good machines,” says chief technology officer Devan Delashmutt. “We wanted to breathe new life into them instead of replacing them.”

At the same time, the district was looking for opportunities to engage students in hands-on learning experiences that would help them develop vital IT skills.  Which is how the idea for a desktop retrofit project was born.

West Ada determined that the best way to improve the performance of their desktop computers was to replace mechanical hard drives with solid-state drives (SSDs). SSDs are much quicker than mechanical hard drives because they don’t have a spinning magnetic platter or moving head. The district chose Intel SSDs for their reliability and five-year warranty, as well as for the support the company provided.

“We decided to upgrade any Intel machine that was an Intel Core i5 generations 1 through 3,” says Keven Denton, IS supervisor. Delashmutt and Denton sent models of the computers they wanted to upgrade to Intel, and Intel came up with a procedure to replace the drives.

“A representative from Intel came out and spent two days with our student interns, training them how to do the SSD replacement and talking with them about careers in education and technology,” says Denton.

Over the summer, the interns retrofitted approximately 4,200 drives. The students and technicians also completed regular summer work, imaging and cleaning close to 22,000 machines. “We were able to accomplish all of our tasks due to having a great group of interns helping us,” explains Denton. “We needed every minute from early June to mid-August to get it all done.”

Last summer, students were invited to work in the technology department. “We wanted to provide students with the whole job experience,” says Denton. “We started with an interview and regular hiring practices. Students received badges, learned how to use our time clock, and worked in teams with senior technicians. What the students learned and did technically was very helpful, but we really enjoyed having them work on teams and collaborate to get the job done.”

Interns had to be at least 16 years old, and 24 students—high schoolers and recent graduates—jumped on board. “The feedback was that they were much happier than they would have been flipping burgers,” says Delashmutt. “They enjoyed learning about technology, the collaborative environment, and doing something productive.” In addition, the college students were happy to give back to the district they had attended.

Walter Kerfoot, one of the summer interns, now works full-time at the West Ada help desk while attending the College of Western Idaho. Kerfoot particularly enjoyed meeting “Doug from Intel” and hearing about what the company is doing. “Installing an SSD is pretty simple,” he says. “We got it down to a routine process: clean the dust from the older PC, take out the old drive, swap with the new, test it, and reimage it. It was a great experience.”

Kerfoot is enthusiastic about the benefits of retrofitting the desktops. “When you have an older PC that still works well but isn’t as fast as you’d like, the SSD improves your speed and quality and is cheaper in the long run,” he says.  The savings realized by this project freed up funds for investing in brand new technology that will help the district move forward with its other technology initiatives.

“This is the first year I haven’t heard, ‘It takes me forever to log in to the machines in the lab,’” says Denton. “We have not heard from any staff about issues with login speed.”

With a large school system and more devices being added all the time, the technology department aims to provide good service and a strong infrastructure. Thanks to a quicker start up, teachers can spend more time on instruction. “When you subtract a minute-and-a-half per login per student, that’s a ton of time saved,” says Delashmutt. Best of all, the SSDs are extremely affordable, allowing the district to extend the life of its older machines while investing in newer technology for the future. 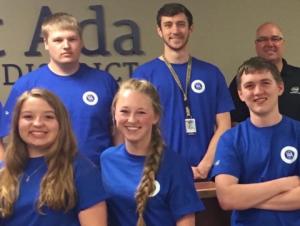 West Ada School District in Meridian, ID, has 38,000 students and is made up of:

The district is one of 433 school districts in the U.S. and Canada being honored by the College Board with placement on the 7th Annual AP District Honor Roll.

In October 2016, Barbara Morgan STEM Academy teacher Kim Miller was recognized for her exceptional use of technology in the classroom with the Jacobs Educator Award.

West Ada has a few 1:1 initiatives and 1:1 pilots. There are thousands of laptops and tablets scattered throughout the district, largely funded through grants and donations. Most secondary buildings have two or three laptop carts that are housed in the library.

The 4,200 desktops that were retrofitted with Intel SSDs were all Intel Core i5 models.