Smart Buses, Powered by the Internet of Things, Extend the School Day at Huntsville ISD

Five years ago, Texas' Huntsville Independent School District began the process of planning a 1:1/BYOT (Bring Your Own Technology) initiative. Community businesses jumped on board, offering free wi-fi access to students, but the district wanted to do even more to extend the connectivity beyond the school walls.

Huntsville covers 644 square miles, and children can be on the bus for nearly two hours each way.  “We began talking about wi-fi on buses,” says Tracie Simental, executive director of technology. “We knew it would extend the learning day and recapture the time students need to finish homework and complete their assignments.”  It would also help students stay connected while en route to after-school sports events.

Simental and Tim Hooks, the district’s transportation director, began discussing logistics. Here’s how the district became one of the first in the county to develop and launch a comprehensive Internet of Things (IoT) bus solution.

Wi-Fi is Just the Beginning

Hooks, who came to the district with a background in education administration, was interested in bringing more technology into transportation. In the fall of 2013, he and Simental began discussing wi-fi on buses. They came up with an extensive wish list that included being able to locate buses through GPS, real-time engine telematics for the mechanics so they could better diagnose buses remotely, the ability to look at cameras in real time to see what’s happening, rider check-in and check-off, and for drivers to hear turn-by-turn directions instead of having to read Yahoo Maps printouts in the dark.

Hooks also wanted electronic pre- and post-trip reports and an app that lets families know when their children get on and off the bus, where the bus is located in relation to their stop, and when it will arrive. Last but not least, they wanted all of this information in one easy-to-use platform that dispatch could understand. “Each of these features comes standard on regular vehicles,” says Hooks. “Why not on a bus that transports millions of kids every day?”

Simental and Hooks met with technology and transportation vendors and shared their list. At the time, other districts were adding one or two of these elements to their buses but Hooks wanted the complete package. “Vendors would show me something and say it was wonderful and would work. I had to see it, touch it, feel it, and let drivers test it out to see if it works in rural America,” he says. 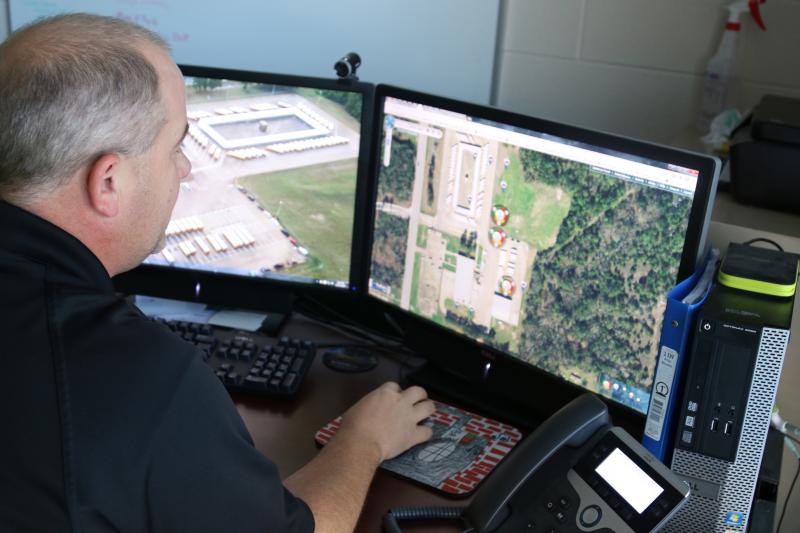 Presidio, an IT solution provider that helps organizations plan and implement technology, was the only company that said it could create an entire IoT solution. Teaming up with Cisco and Intel, Presidio spent a year developing the ConnectED solution, and 15 buses are currently pilot testing the units while the district trains 15 different drivers, groups of children, and groups of parents. They’re gathering feedback and updating/tweaking the solution.

Hooks is excited to be on the forefront of such groundbreaking technology. “IoT can put wi-fi on buses and tie into what’s happening in classrooms. It knows which partners do which things and can bring them in and make them all work together. That’s where we saw the biggest advantage to having IoT involved from the beginning.”

Back at the Schools…

Two years ago, Huntsville launched its 1:1 program for grades 6 through 12. Because the district was already using Google Apps for Education, Chromebooks made the most sense. Plus, they were an affordable solution. “We use cloud-based services and hosted apps, so when the Dell Chromebooks dropped below $300 per device, it was a no-brainer,” says Simental.

She chose the Dell Chromebook because it was rock solid, had a rubberized edge, screens that completely flatten, and a bi-directional cord. “You find out how sturdy your product is after four or five months. Other districts went with a cheaper model and have now replaced so many screens and keyboards.” One other thing in Dell’s favor was that the company helped the district create a student tech program at the high school where students can get Dell certified.

The 4,000 students in grades 7 and up take their Chromebooks home; the 400 sixth-grade students will start bringing theirs home this spring. Grades 3 through 5 have Chromebooks for classroom use; students can check them out for a day or two as needed. There are hotspots outside the schools and throughout the community to continue the anytime/anywhere learning. In the first year, teachers worked on adapting their instruction and helping students learn about their responsibilities.

The plan is to expand to the full fleet of 87 buses and 40 white vehicles that transport students. “My goal is that anything that hauls a student—from the four-girl golf team to the 30-person swim team—will have the same access,” says Hooks.

Because the wi-fi is delivered via a Cisco 829 router that’s hard-wired into the bus, it gives the district the ability to connect a lot more devices at one time and to even hook up VoIP if desired. In other words, it offers expandability, something that was crucial to both Hooks and Simental. “Technology is always evolving. We think we know what today’s work looks like, but what about two years from now?” asks Simental.

“By having a Cisco router and Intel components, the solution allows us to hook up a variety of camera systems. We don’t have to buy everything from one vendor and can have different products work seamlessly together,” adds Hooks. “My tech director is side by side with me, the board understands the importance of this, and the superintendent and department superintendents understand that it takes time to build what we want for our children.”

Huntsville ISD spreads across 644 square miles, much of which is rural. There are 7 state prisons inside the district, and nearly 50 percent of the land is not taxable because it is owned by the state.

1,500 Chromebooks for grades 3 through 5 classrooms.

The smart school buses are equipped with Cisco 829 routers.