Small Pilots Lead to a Successful 1:1 Program in Hillsborough, NJ

Four years ago, when the leaders at the Hillsborough Township Public Schools started discussing 1:1, they were determined to take a careful and thorough approach to making their purchasing decisions. In addition to the typical research undertaken by districts – visiting existing 1:1 schools, for example, and talking to vendors – they opted to launch a variety of pilot projects to test out possible devices in a real-world setting.

Based on initial success and positive feedback, the district decided to try more pilots. In 2012-2013, 60 fifth-graders received Chromebooks and 60 other fifth-graders, along with 120 seventh-graders, were issued iPads. Several classes of high schools students also received devices – half of them iPads and half Chromebooks. In the spring of 2013, every K-4 student received a Nexus 7 tablet as part of a Google pilot. The tablets were on classroom carts that stayed at school.

“We saw great success and transformation during the pilots,” says Joel T. Handler, director of technology, “especially in the elementary and middle schools where students and teachers had 1:1 access throughout the day.” In the high schools, where each participating teacher only had a single 1:1 class per day, he observed that “they had to do a lot of work for just one period.” Overall, however, “the devices helped students develop superb organizational skills and keep better track of their work.”

The groundwork had been laid for a district-wide move to one-to-one but which hardware was best for the middle and high school grades: iPads or Chromebooks? Although both devices had successful pilots in the upper grades, Handler says that the iPads required more manpower to configure, support, and maintain. “When an iPad breaks, it takes three days before the student can get it back to where it was before it broke,” he says. “When a Chromebook breaks, the student is back on track in 15 minutes. That’s a huge difference.”

Additionally, the students had a harder time focusing with the iPads and were more distracted by them. “They were seen as a toy, as an extension of the iPod Touch,” explains Handler. “It was hard for many kids to wrap their mind around the iPad as a school device.” Another issue was that students couldn’t use their school ID to log in to the iPad and had to use a personal one.

Once the schools had reached consensus about the idea of moving to Chromebooks, specific models needed to be chosen. “Our teachers wanted a touch screen for math and science, which helped us narrow down the Chromebook choices,” says Todd MacDonald, technology integration coordinator.

Ultimately, for grades 5-12, Hillsborough selected the Acer c720p Touchscreen Chromebook, which the teachers love. “We are starting to see more things you can manipulate with your fingers and we think that’s a growing movement,” says Handler. “It’s a four-year investment, and we felt if we didn’t buy touch screens – even though it cost a bit more – it would be a mistake.”

For grades K-4 the district opted to stick with the Nexus 7 Android tablets. Each class was issued a complete set of the devices, making it a true 1:1 environment during the school day, although the tablets do not go home with students at night.

By the final year of the pilot (2013-2014), 960 students (approximately 20 percent of the population) in grades 5 through 12 were working with Chromebooks and grades K-4 were embracing the Nexus and focusing on integration.

In August, 2014, all 4,600 students in grades 5 through 12 received their Acer Chromebooks. During the last three weeks of the month, students were invited to come in to get their device and sign their paperwork. Amazingly, 95 percent were distributed in two weeks, so students brought them to school on day one. “We knew who the last five percent were and we knew their homerooms, so we gave out the remaining ones first thing. By the first period of the first day of school, we were a complete 1:1 district,” says Handler.

As soon as the teachers got their laptops, the IT department started using Google Apps for Education and Gmail. “We knew they’d need training, so we offered more than 100 two-hour courses in the summer of 2012,” says MacDonald. Those courses began with basic productivity (Gmail, calendar, classroom management) and moved on to meeting the district’s three technology goals: asynchronous learning, globalizing the curriculum (including virtual courses, worldwide collaboration, Google Earth), and the creation, collaboration, and publication of digital content. Teachers who took summer courses earned release time during the first in-service day.

More than 500 teachers attended at least one class. “The teachers learned that there were people in the district who could help them; it was the start of a positive culture shift,” says MacDonald, who taught the courses with two other people.

Today, MacDonald’s team of 30 teachers receives a small stipend for offering tech classes before and after school throughout the year. The classes are about integrating technology—not how to use a specific product. Not too surprisingly, about 85 percent of the staff completes the six hours required to skip an in-service day, with over 20 percent taking more than six hours.

Because of this robust PD, many teachers embraced their 1:1 classrooms from the start and others are moving in that direction. According to MacDonald, “It’s powerful to see teachers collecting instant feedback, adjusting lessons on the fly, encouraging more collaborative classrooms, and giving students more choice when it comes to the medium to display their grasp of a concept.”

Because all K-4 classrooms have Nexus tablets, the teachers are able to work with students on problem solving and decision-making, rather than just memorization or reciting facts. “When they first got the tablets the teachers explored apps but we wanted it to be more of a pedagogical shift,” says Handler. “We had to support them with learning goals and figuring out how to alter their teaching.” To help them learn how to integrate the tablets, teachers relied on each other for advice and formed professional learning communities. 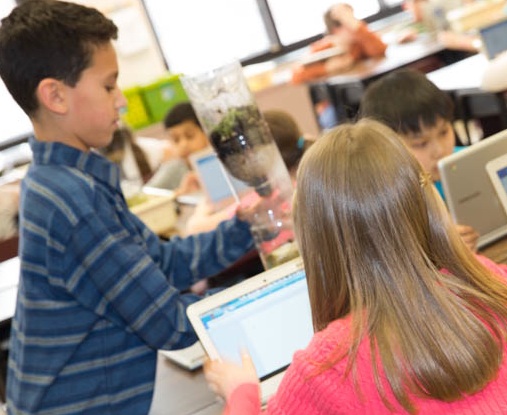 “We are seeing exciting things happening in pockets all over the district,” says MacDonald, who observes that the 1:1 in grades 3 through 6 is particularly thriving. “The children work independently, enjoy learning, and listen to their teachers, who do a lot of student-centered activities that let the kids blossom.”

Larissa McCann and Amy Mele, who are currently out of their classrooms to serve as one-year technology coaches, agree that Hillsborough teachers are embracing 1:1. “They are learning how to teach students in a different way,” says McCann.

Mele, who taught second grade, worked hard to stay away from traditional app activities when she began using the Nexus tablets, especially since the students asked for Subway Surfer as soon as they saw the devices. “I looked for apps that were appropriate, had good teacher feedback, and offered differentiation,” she says. When she found inexpensive, quality apps she shared them with her colleagues. One of her favorites was Raz-Kids, a guided reading program with ebooks and comprehension quizzes.

McCann, who piloted both the iPads and Chromebooks in her seventh-grade science classroom, used the Nearpod app to turn her PowerPoint presentations into slides that included quizzes, drawings, and other interactive elements. “My whole style of teaching changed because the students were involved in learning the whole way through. With Nearpod I could insert poll questions that the students answered on their Chromebooks and flip my class by sharing my presentations for students to watch for homework.”

For her weather unit, McCann asked students to work in groups and create videos to teach elementary students about wind. Her students were very excited to share the videos throughout the district.

From the youngest children to the graduating seniors, students at Hillsborough Township Public Schools are learning in a 1:1 environment that will better prepare them for life after Hillsborough.

Article: Choosing Between iPads and Chromebooks

Article: Are iPads or Chromebooks better for schools?