“We weren’t always sure we were going to do a district-wide 1:1, but mobile computing was a big piece of the plan,” says Tony Zahn, director of instructional technology.

In 2011, the district chose six tech-savvy master teachers to receive training and create model classrooms with tablets and laptops for students and a laptop for the teacher. Over the next several years, teachers applied to join the cadre. “We looked for teachers who were implementing best practices and delivering student-centered instruction,” says Zahn. “We helped them learn how to make good instruction even better with technology.”

Teachers continued to join until they reached a tipping point in 2013-2014, with some campuses having more devices than students. At that time, a district-wide 1:1 made more sense.

“We recently brought some high school teachers to elementary and middle school campuses so they could see what the students were doing and how they were being prepared differently than in the past,” says Zahn. “They need to be ready for students who’ve had a device in their hands since kindergarten.”

The district uses both the SAMR model (Substitution-Augmentation-Modification-Redefinition) and TPACK (Technological Pedagogical and Content Knowledge) as instructional frameworks, and teachers know there are multiple ways to get students to master standards. How to use technology is a part of their professional development, but what’s more important is how you design the lessons. Teachers learn to make all the pieces fit together and that technology is only one part of the overall package.

At GCISD, there is an instructional coach at every building. In addition, there are at-large coaches who go to campuses as needed. Some specialize in content and some specialize in technology, but both are building capacity in the other area. “The coaches are terrific collaborators,” says Janie Stach, coordinator of instructional technology. “They’ve helped one another grow their abilities, including blogging, moderating Twitter chats, and working with teachers to integrate technology.” 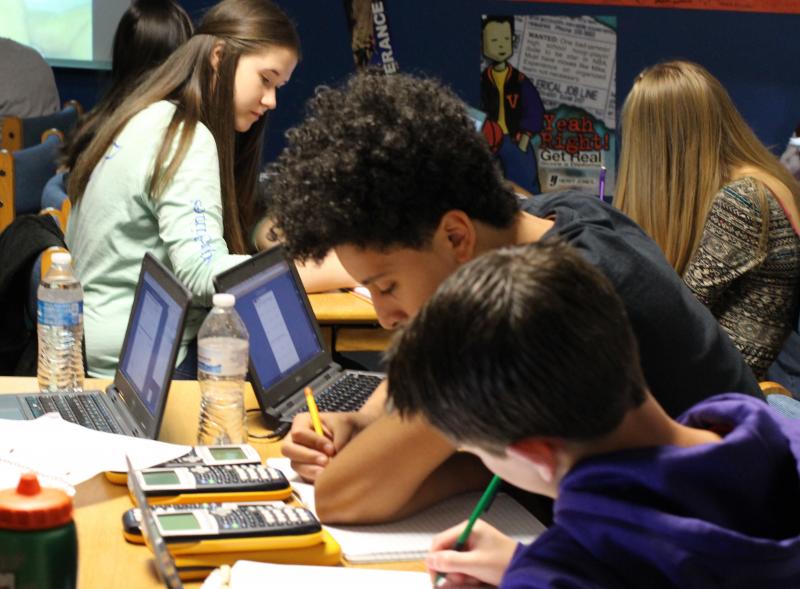 At the start, GCISD students used a mix of iPads and laptops. Last year, the district launched a few Chromebook classrooms, but teachers always had a laptop. In 2014, secondary classroom teachers were able to trade their iPads for Chromebooks. Paul Aceves, executive director of technology, says many teachers happily made the switch because their students needed keyboards and were using Google Apps.

Today, the district has moved away from Chromebooks. “They are great and inexpensive but present management and security issues, and Google doesn’t allow in-depth API development,” says Aceves. Now GCISD purchases 11-inch Dell 3150 laptops with Windows 10. “We opted to go with the Windows platform for manageability and integration with network security solutions,” explains Aceves, “and to jump from Windows 7 to Windows 10 because we felt 10 was a more stable platform and were pleased with the improvements we saw in the release.”

The high schools currently use a wide range of devices, including Windows, Mac OS and Chrome. The plan, contingent on funding, is to expand the 1:1 program into the high schools in 2017.  Aceves says, “We would like to utilize a Choose Your Own Device (CYOD) model at the high schools in which we offer students a choice of either a Windows OS or Mac OS laptop, but this will depend on the level of funding and projected sustainability.”

The 1:1 classrooms are doing a lot of authentic work, according to Aceves. For instance, there’s a kindergarten class that uses Skype to collaborate with the developer of a math app. Because of their feedback, the developer created a multi-player mode and added a female character. “The children realize they have a voice,” he says.

“Instead of focusing on game-based practice apps, we promote using creation apps like PicCollage and Tellagami that can be used in any content,” says Stach. These apps let students show knowledge about a topic using real-world pictures, adding voice, and so on. Teachers are also using tools like TodaysMeet to have a back channel for processing, and Sli.Do for polling and collecting information.

Zahn says the teachers with the most robust personal learning networks do the most authentic work with their students, such as the kindergarten teacher who met the app developer on Twitter. “We can’t limit collaboration to ourselves or even our district or we’re limited to that knowledge,” he says.

Deborah Morgan, an English language arts teacher at Colleyville Middle School, piloted Minecraft EDU for a couple of months and decided it was a good tool. “We announced it to schools and there was a lot of interest, although using it requires a lot of work on the teacher’s part,” says Brian Subia, who handles application support. Still, he says a lot of teachers are giving it a try because they love how it engages their students. For a lesson on ancient Rome, a middle school social studies class used Minecraft to build the Coliseum. Several elementary classes use it to manipulate objects for storytelling. Morgan’s students volunteer their time to develop the worlds for her lessons; doing so allows them to expand what they’re learning.

When teachers first started with Minecraft EDU, Subia, along with instructional coaches, hosted a professional learning event for interested teachers to collaborate. “Brian shared what it would be like to use it in your class from a tech standpoint and what students would have the rights to do,” says Stach. “He also talked about proper vocabulary: it’s not ‘we played with Minecraft' but ‘we worked on X by using Minecraft.’”

A Way of Life

“There was a perception that kids were being solitary and looking at devices all day, and that is not at all true,” says Zahn. “They are more collaborative with devices because of the nature of the work that’s being designed. Our end goal is to get to seamless integration, where everyone is using technology as a way to just do their everyday work.”

Zahn says teachers have learned that technology doesn’t have to be part of something grandiose. There are various levels of products, such as “paper plate projects, everyday dish projects, and china plate projects,” he explains — and all of these projects have value and are driven by state standards. “When we think about technology, we need to decide which level makes sense. It doesn’t have to be china plate all the time,” he says.

Recently, an elementary teacher was going over the parts of a plant. She asked students to demonstrate that they knew all the parts. Some students used an app and drew; others grabbed construction paper and glue. Each student chose how to show his or her learning, and that’s what it’s all about.

Grapevine-Colleyville ISD is in year three of its 10-year strategic plan to create an innovative environment where students are inspired, encouraged, and supported.

Among its many accolades:

Grapevine Middle School is the district’s first secondary STEM Academy. The expansion of STEM into middle school aligns with the work that is being done at Cannon Elementary: A GCISD STEM School. As part of the LEAD 2021 Digital Classroom initiative there are several digital classrooms at the high school level.

By fall 2016, all four middle school campuses will be 1:1 with Dell 3150 11-inch laptops, fifth graders will have Chromebooks, and students in the younger elementary grades will continue to be 1:1 with iPads.

Every classroom in the district has a Boxlight interactive projector that teachers and students use for interacting and annotating.