Personalizing Learning in Oakland, CA, with Help From Chromebooks

What does personalized learning look like and how can it help our students? That’s a question that California’s Oakland Unified School District (OUSD) began asking itself several years ago. With help from the Rogers Family Foundation the district began working on blended and personalized learning pilots in several of its schools.

To choose the devices for  OUSD’s personalized learning initiative, a team evaluated various options and quickly narrowed in on Chromebooks because of their affordability and ease of use. At the same time, the district worked on installing the infrastructure that would be needed for widespread implementation. In 2014 a major upgrade deployed 3,500 Meraki access points – including at least one for every classroom.

Once the groundwork was laid, it was time to figure out which Chromebook was the best fit. “For us, having the Intel power was really important,” says district CTO, John Krull. “We compared against other chips and did internal performance tests at SpeedBattle.com. The Intel-based Dell 11 Chromebook came out on top, performance-wise.”

Krull’s team conducted crash tests too, and the Dell 11 Chromebooks were the sturdiest of the models available at the time. The affordable price tag was only one important factor, he says. “We also needed a product that would be good for the long term, and the Dell units we chose have 4GB of RAM. From a technology standpoint, with the Intel processor and RAM, it was the right choice.”

Krull is pleased that the district is able to run VMWare over the Chromebooks, allowing access to Windows applications. “One staff member’s Chromebook was stolen from her car on the first day,” he explains. “Because of VMWare and cloud-based management, she was able to pick right up where she left off in her Windows session with a new Chromebook.”

“We implemented an equitable, supportable, standardized, secure environment, and schools are encouraged to add to what we provided,” Krull continues. “Some schools are 1:1; others are 2:1, and many have a mix of Chromebooks, PCs, and Apple devices.” 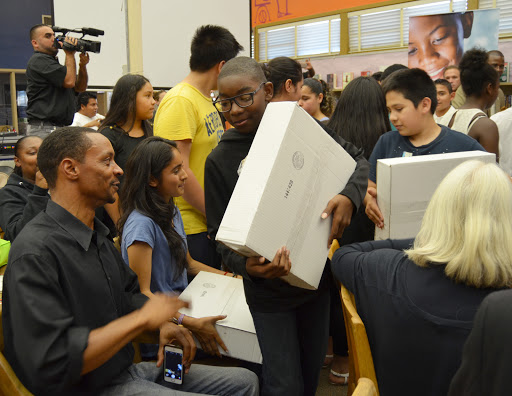 Students leave the Chromebooks at school, but the district started a program called “Get Connected Oakland 1-1 Around the Clock” to help get devices and Internet into every home. OUSD partners with nonprofits such as Oakland Technology Exchange West and corporations such as Comcast, with the goal of bringing computers and Internet to every home within two years. They gave out approximately 1,000 computers last year.

Personalized Learning and Other Successes

OUSD enrollment, which had been declining for 10 years, is up by more than 600 students this year, and Krull believes that technology and the changes it brings have something to do with this.

In the initial blended learning pilot, OUSD had documented increases in student engagement. With interest building, the Rogers Family Foundation received a $1.8 million dollar Next Generation Learning grant that allowed 10 additional Oakland schools to do pilots. The district also created a position for a director of personalized learning, Stacey Wang, to support the schools internally and continue figuring out how to define personalized learning for the district. “We’re taking the time to do it right,” she says. “We’re thinking through what the how should look like and what the what should be.”

Wang shares an example of the ways in which doors can open with help from the technology: “Last year, on the first day of school, we had a third-grade student who was a newcomer to the U.S. and spoke no English. His dad was hovering, nervously, as the boy struggled to get settled. Every other student was using ST Math, an innovative, adaptive online program, so we gave him a Chromebook, logged him in, and got him started on ST Math as well. Within minutes, he waved his dad away,” says Wang. “He ended up having a great first day due to technology providing an opportunity for him to access learning in a way that bridged the language gap.”

Greg Klein, senior director of innovation and learning for the Rogers Family Foundation, is impressed with the way OUSD is encouraging teachers to shift their instructional practices. “When we started with the blended pilots years ago, we did not ask schools specifically to redesign the role of teachers or students. It was more like, ‘Can your algebra class get further, faster with a mix of small-group instruction and online content?’ But what has resulted is a major shift in instructional practices, with teachers as facilitators and students able to learn the same thing in different ways and have more choices about how to demonstrate mastery.”

One elementary school Klein works with went from having very little technology to almost every teacher using online content and doing station rotations. A few other schools are emphasizing maker education. They are experimenting with low- and high-tech creation and learning how it offers a way to personalize learning.

Teachers also love the way the Chromebooks allow their students to extend themselves in new ways. Jo Paraiso, who teaches 12th-grade English and the Senior Capstone project at Fremont High School, asks her students to blog about social justice at Youth Voices (youthvoices.net). One of her students used the Youth Voices forum to conduct surveys and do field research on bullying for his Senior Capstone project. A bullying victim himself, he was able to make connections with students across the country and learn from them.

“The most powerful part was that he learned how many others were in the same boat and could talk about it. He saw himself as less of a victim and more of an advocate,” says Paraiso. “He really found his voice.” The student is now hoping to use his tech skills to develop an app for other young people who need to find support services. Imagine what can happen when more students use their Chromebooks to find their voices.

73% of the students receive free or reduced-price lunch

31% are English language learners and 50% of speak a language other than English at home. In all, over 100 different languages are spoken

3,000 HP Chromebook 14 G3 Touch devices have been issued to all teachers and principals across the 86 district-run schools.

A total of nearly 3,500 Meraki wireless access points have been installed. Every classroom has wireless.

A new wired LAN with Cisco switches serves as a backbone. Comcast is providing a minimum 1Gbps egress from each site. The district has dual connections to the Internet totaling 40 Gbps.

OUSD is now at a 1:3 ratio of computers to students. Some schools are 1:1; others are 2:1, and many have a mix of Chromebooks, Windows computers, and iPads.