Webster’s Dictionary defines success as: “the degree or measure of succeeding or a favorable or desired outcome.”

“It’s been absolutely incredible,” says Brian Zimmer, Director of Educational Technology and Information for Webster Central School District, of the district’s new 1:1 initiative. “We had to provide what our kids needed to get them to the next level so that they could truly grow: to make sure we prepared them for what doesn’t even exist yet! We focused on treating technology as a tool…something that teachers use when it’s appropriate for learning.”

An Opportunity for Growth

The Webster Central School District is the third largest school district in Monroe County, located just outside of Rochester, New York, between Lake Ontario and Irondequoit Bay. Webster’s 1:1 initiative— implemented in September 2016—was born from the district’s robust, family-oriented culture as part of a model for continuous growth: one where students, teachers and staff are empowered to take risks and overcome challenges. The most significant of these challenges, says Zimmer, was poor technology.

“In the past, we hadn’t been properly mindful as to how we purchased technology, which created a lot of bad experiences for people,” he explains. “There were too many initiatives on our teachers’ plates and we didn’t have one solid focus where we were all speaking the same language at the same time. We were trying to balance the expectations of upper level administrators with what made the most sense in terms of giving educators and students what they need to do meaningful work. This provided a welcomed opportunity to talk about these challenges, leading to powerful problem-solving sessions.”

In 2014, New York State Governor Cuomo called for $2 billion to be invested in state schools through a Smart Schools Bond Act: an initiative that would finance educational technology and infrastructure, providing students access to the latest technology and connectivity needed to succeed and compete in the global economy.

As the district’s technology was inconsistent, Webster Central School District used this money to build future-friendly classrooms for all schools in order to maintain a level playing field.  Some of this money was earmarked for devices—2,000 iPads for K-2, 7,000 Chromebooks for grades 3-12, and new laptops for teachers—with the majority going to improving infrastructure and security.

In 2015, the Webster Central School District put together a committee to craft their technology vision. An open invitation email was sent to everyone in the district, as well as to some community members, resulting in a group of three community members and 48 district employees.

Next, a task force was formed consisting of engaged teachers and a district implementation team, all of whom were given the responsibility to ensure a smooth transition over an 18-month timeframe. In this way, Webster could have an in-the-trenches view as to how the 1:1 initiative was playing out in classrooms.

Webster hosts the majority of their servers in-house, employing two buildings as main hosts. The district has 500 access points—going up to 1500 points soon—with multiple fail-over points.

“If something happens at one school, our other 11 buildings continue to function,” says Zimmer. “When we implemented wireless six or seven years ago, we didn’t worry about density as our infrastructure was built on devices. But now we want to make sure that teachers aren’t impacted by how many students are using our connection. So redundancies are built in. We didn’t have an unlimited budget, but wanted to guarantee the best experience possible.”

Supporting Teachers and Students with Technology

The district had been using GAFE (Google Apps for Education) for years and had decided that it would be their platform moving forward. A cadre of certified GAFE teachers assisted their colleagues. In 2015, Webster held 182 different sessions— including everyone from instructors to custodians—on a variety of Google-related issues, ranging from using Gmail to Google Calendar.

“With teachers, it was about how to find different apps, for instance, or approaches to new technology,” Zimmer explains. “Say a teacher wants to learn about YouTube. They could view this as a professional learning opportunity. So we wanted to educate our teachers so that they could educate down. But we also wanted to make it clear that a teacher doesn’t have to know everything. You can entrust students, and—if they find something—they can help us all grow as well, forming a continuous circle model that includes kids in the process. Our board would really like some of our professional development to be provided by students. In fact, we are starting a program where kids can repair devices as well as looking into a student technology panel.”

Giving students more agency requires a new approach to classroom management. And while Webster Central School District adheres to all federal and state standards, Google tools can pose some unforeseen challenges for educators.

“Last year, we had a little issue where inappropriate YouTube content came up as thumbnails,” Zimmer explains. “This resulted in some push-back from parents. So we had a moratorium for a few days, but then made a decision with our attorney to see if we were OK with this. We decided to allow our teachers wide-open access, and only filter gambling sites, pornography, and the usual unsafe content.  So now if students are doing something inappropriate, we view it as an opportunity for discussion. We don’t want kids to do everything perfectly. We’d rather have them make their mistakes here and now rather than do something inappropriate in college or at work because we didn’t talk about it now. We want our teachers to build trust. And if a student makes a bad choice, then we help them grow from that experience. Grading a zero doesn’t really help anyone.” 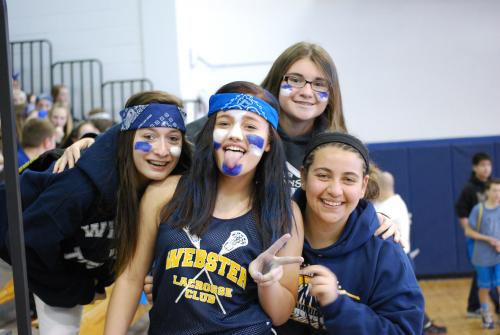 One tool that is proving to be particularly popular in Webster schools is Google Classroom. Teachers are using it not only as way to organize learning materials, but also as an opportunity to communicate with students in unique and profound ways.

“My son is in 4th grade, and he was writing a story,” Zimmer says. “He noticed that his teacher was online, looking at his work. What we’re seeing is collaboration continuing well beyond the normal school day, with kids getting meaningful, real-time feedback so that their learning can move forward. My son struggles with reading, but after he got feedback from a session, he understood how he could move on. Google has made this whole process so easy.”

Webster’s middle school math teachers are seamlessly integrating technology into their curriculum by flipping learning with Google Classroom. Teachers have students preview concepts at home that will be covered more comprehensively in class to make better use of school time. And math scores are improving as a result. Now the middle school math department is conducting professional development with other teachers to expand this flipped learning model to other subjects.

“We’re very interested in flipping our elementary schools too,” Zimmer says. “By flipping classrooms, learning doesn’t have to stop for a student just because he or she is sick. They can still continue to learn and grow: not get buried by missed work or a thousand missing worksheets. Students and teachers are also recording more of their learning and sharing this with parents. I can’t wait to see the exponential growth these kids have due to these exciting new resources.”

Webster Central School District is also hoping to personalize learning when and where appropriate. Initial attempts have proved more successful in the district’s elementary schools—focusing on math levels and reading levels, and providing instant feedback—than in their more traditional high schools, where teachers currently tend to think more of Advanced Placement options rather than true personalization.

“For me, our initiative comes down to the classroom experience going forward,” says Zimmer. “I’d like to see our curriculum become more dynamic and more differentiated: not just the same old sage on the stage model. This gives students the opportunity to really problem-solve on their own, with teachers being freed up to mentor and provide special attention to kids who are struggling. Another thing is that our kids are happy. They are doing what they need to do, achieving what they want, and doing it successfully.”

Zimmer attributes the immediate success of Webster’s 1:1 initiative to a top-down approach: putting teachers in the driver’s seat. Besides instructional and fiscal resources, teachers were asking for more technology in the classroom. So 1:1 wasn’t an example of administration forcing something to work. Teachers were hungry for new tools and approaches to reach their students.

“We want to build capacity from the grassroots level, not saying ‘you have to do x, y, and z’,” says Zimmer. “Teachers are eating it up because they know that it’s the right thing to do and trust that it’s the right way to teach our kids. We’re showing that we trust them enough to allow their capacity to grow and giving our teachers what they may need to work moving forward.”

“Before, we were so focused on testing that kids lost their creativity and ability to think outside of the box,” says Zimmer. “Now we focus on essential 21st century skills so that our kids can be successful in the real world: showing perseverance, risk taking, collaboration, and the ability to think on their feet. We want kids to really embody and demonstrate those qualities. That’s what success looks like to me. I want my son and his peers to be great people that make sound decisions so that they can do anything they want when they grow up.”

All seven WCSD elementary schools utilize data to make instructional decisions on behalf of students supporting the District’s focus on continuous improvement for all learners. These efforts have resulted in WCSD’s recognition by the New York State Education Department as a best practice elementary program.

The Webster Central School District offers the most comprehensive Advanced Placement (AP) program in Monroe County.  During the 2012-13 school year, there was a 68% increase in the number of students enrolling in at least one AP class since the 2008-09 school year.

The College Board named WCSD to its AP Honor Roll for three consecutive years.