Miami-Dade Focuses on Equity in its 1:1 Initiative | K-12 Blueprint

Miami-Dade Focuses on Equity in its 1:1 Initiative

When you’re planning a 1:1 initiative for a district the size of Miami-Dade Public Schools – the nation’s fourth-largest district with 345,000 students, 40,000 employees, and 392 schools – it’s crucial to have support at every level. And that’s before you even start discussing things like infrastructure and who gets what device. “Our superintendent, Alberto Carvalho, started here in 2008 with many challenges, but he always knew this was where he wanted to go,” says Sylvia J. Diaz, assistant superintendent for innovation and school choice. “He wanted to make sure all students have access to technology for instruction, and his passion and fearlessness helped us get where we are.”

And where they are today is extremely impressive: 45 million square feet of Wi-Fi coverage, the passage of a $1.2 billion bond referendum, a 10-gig data center, interactive whiteboards in all 18,000 classrooms, a combined 30,700 Window 8.1 tablets for seventh-grade civics and ninth-grade world history students, 16,000 laptops that can be shared among the different elementary classes and students, and a plethora of digital resources integrated throughout the curriculum.

You may be wondering: How on earth did they pull this off so successfully? According to the team behind the ambitious Digital Convergence program, the plan begins and ends with the alphabet:

A is for applications. “We approached our evolution differently than other districts,” says Maria L. Izquierdo, chief academic officer. “Rather than focusing on the device or the platform, we discussed the apps, e-books, and digital content we were already using and then determined which devices would expand the use of those programs.” Thanks to a brand new seventh-grade final exam in civics, starting the 1:1 Digital Convergence in middle school made sense. “There’s a need for students to perform well on this complex test and there’s a lot of terrific open-source content for social studies,” says Diaz.

B is for bandwidth. “We knew we’d have to increase bandwidth to support the 1:1,” says Deborah Karcher, chief information officer. “You can’t introduce 100,000 devices into a network and think the current infrastructure will be sufficient.” Thanks to the bond money raised in 2012 and E-rate funding, Karcher was able to increase the data center’s infrastructure from 2 gigs to 10 gigs. “We use Procera to monitor, regulate, and prioritize traffic,” she says. “We want to grow it responsibly.”

C is for connectivity. The need to go wireless was equally obvious. Karcher knew she couldn’t build a 1:1 initiative using a hard-wired approach. Wireless makes many opportunities possible, including managed BYOD, flexible learning environments, and students connected throughout the entire school day.

D is for devices. Like many other districts that have gone 1:1, Miami-Dade whittled down the options and sent the finalists to middle and high schools for testing and feedback. The secondary students got Windows 8.1 HP tablets. Elementary schools received HP laptops because of a new state assessment for writing that requires keyboards and because district leaders felt that younger students needed to develop keyboarding skills.

As part of the district’s fight to bridge the digital divide when it comes to Internet access, laptops were given to students in grades 3 through 5 at 19 of the state’s lowest-performing elementary schools. “We want to maximize time on task and let students work with Reflex, i-Ready, myON Reader, and other apps we’ve licensed,” says Izquierdo.

Because many of these children were without Internet access at home, the district worked with EveryoneOn (part of President Obama’s ConnectED initiative) to get low-cost Internet access – including mobile hotspots – from Sprint and other vendors. “We purchased the Sprint Hotspots and can use them for four years,” says Karcher. “Best of all, our families don’t have to sign any contracts.” It’s an interesting and successful program, she says. “These families tend to move a lot – we have a 30 percent mobility rate – and they can just bring the hotspot with them.”

The Need for BYOD

No matter how much money the district raises, buying 250,000 devices will never be possible. For that reason, it’s important to let students bring their own devices when they have them. Recently, 15 percent of ninth graders surveyed said they would be able to BYOD, but Diaz believes the number is closer to 20 percent.

“All schools are BYOD capable,” says Karcher. “Those devices are on a separate VLAN to protect our network.” Her team uses Meru’s identification management system to know who’s logging in and if it’s a district-owned or BYOD device. Once that’s established, the device is automatically recognized. “It gives us the control we need over who can log in and how many devices they can connect with,” adds Karcher.

Having a managed system allows the technology department to deploy all devices with a small staff and ensure that wireless traffic flows smoothly. They can also decide when to update apps and conduct other timely tasks so that teachers and students get the most benefit from the school day.

“We can put all the money into these systems but teachers won’t use them if they aren’t comfortable,” says Izquierdo. “We continue to invest heavily in professional development and are making a concentrated effort to help teachers learn how to use the supplemental software and integrate it into their lessons.” 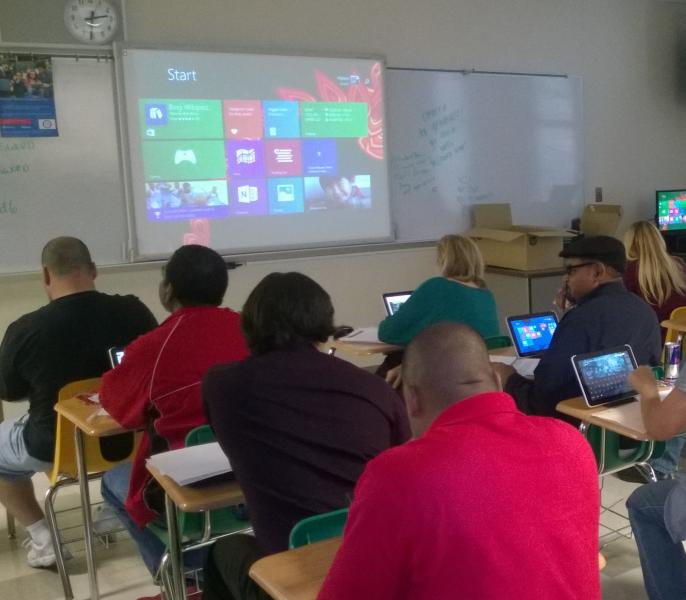 During the summer, the district offered training on using Windows 8.1, Microsoft Office, OneNote, and OneDrive. In September, more than 600 employees attended Digital Learning Day, choosing from 90 sessions on software and tech integration. “Every school had to send an administrator and a teacher who could go back and share what they learned,” Izquierdo exlains.

A planning day in early November offered in-service to more than 8,000 teachers. Much of that focused on interactive whiteboards (IWBs), since every single classroom now has one. Over the summer, based on Superintendent Carvalho’s vision, 11,500 Promethean ActivBoards were hung in classrooms. (The other 6,500 classrooms already had SMARTBoards or other IWBs.)

The next round of PD will focus on classroom management. “We want to provide teachers with tools that let them share slides and other materials and be able to see what their students are doing,” says Diaz. “Ultimately, we’re looking to bring that to an enterprise level where we can have data about what they are using and how the students are learning.”

The 22,000 9th-grade students take their tablets home and have an app that works offline, so access is not an issue. “When we buy apps, we look for ones that let students download what they need, work on it at home, and upload when they get back to school. It’s the first question we ask,” says Izquierdo. Diaz adds, “We can’t solve connectivity overnight but we can make the tablets as useful as possible.”

Already, many civics and world history teachers are embracing the tablets and how they’ve changed the classroom dynamic. “They tell me their students are excited and that their jobs are easier as they go from providing every single thing a child needs to becoming more of a facilitator,” says Bob Brazofsky, executive director of the social studies department. However, he knows that this is just the beginning and that teachers will continue to push and improve. “Our challenges and barriers are getting teachers to not just replace the textbook with the tablet,” he adds. “I want them to get students researching, discovering, answering essential questions, and using our new resources.”

As the PD moves from the nuts and bolts of using the tablets to sharing best practices, Brazofsky is pleased that he is able to send one of his four staff members to schools to observe and support rigorous instruction using the new technology resources. This staff member brings in star teachers so that others can learn from their methods because, as he says, “Nothing is more powerful than a teacher showing other teachers what to do.”

Kelvin S. Watson, a seventh-grade civics teacher at Coconut Palm K-8 Academy, agrees that the tablets have dramatically changed how he teaches. “Before,” he says, “it was difficult to make copies because the copy machine was out of order or there was no paper in the building or my classroom printer was out of toner. I had no accessibility to resources that were readily available at my fingertips or any way to assign the material. Now, there are no limitations on the assignments or activities I can place in my lesson plans.”

As a teacher with low-level readers, Watson knows it’s beneficial to find the right resource for each student. Thanks to the tablets, he can do just that. “No longer are students just copying notes and feeling distant from the learning process; now they can answer questions, manipulate text, watch videos, and open links. The 1:1 program has given students a purpose for learning.”

According to Watson, the summer PD gave him the confidence to handle the 1:1 integration. He likes that the district presented various apps (My Big Campus, Microsoft OneNote, ClassFlow, LanSchool, etc.) and let teachers choose programs that made them comfortable. “We know our students and what will draw them in. The students are more than drawn in; the tablets captivate their minds. They are ready and willing to learn as they enter the classroom because they enjoy learning and using new programs.”

Watson admits that he was apprehensive about the 1:1 initiative; he thought students and technology would never mix because students were always trying to play on their phones instead of pay attention. “The phone struggle is no longer,” he says. “Showing a little trust in the students and starting the tablet integration has helped the students become more responsible.”

Brazofsky agrees. “I came to this role kicking and screaming, due to a very small staff and many competing responsibilities; but now, since I’ve seen what these teachers and students are able to do, I’m a convert.”

interactive whiteboards in all 18,000 classrooms

21,000 HP laptops to be shared amongst elementary schools