The Keys to One-to-One Success in East Noble, Indiana

In the fall of 2010, East Noble School Corporation (ENSC) began planning for a comprehensive 1:1 initiative with the intent of dramatically changing teaching and learning in the district.

“The idea of incorporating technology into the classroom wasn’t new to us,” says East Noble superintendent, Ann Linson. “Our elementary schools had had computers in them since the early days. But they were scattered in different classrooms and labs and they weren’t being used very often. When we surveyed the teachers about this, they said it would be more feasible – and more impactful – to incorporate the technology if it were more readily available.”

Thus began a year-long process that led from visioning and researching to full deployment of one-to-one in several grades by the fall of 2011. With encouragement from the Board of Education, the East Noble technology department made upgrades to the infrastructure in all eight school buildings and central office and evaluated a variety of devices before finally deciding on iPods for K-1 students, iPads for 2nd through 4th grade students, and Lenovo Thinkpad Edge laptops for grades 5-12.

“Since then we’ve replaced the iPods with iPads in the younger grades,” says Linson, “but once the students hit 5th grade, we are convinced that Windows is the way to go. There’s more software and web sites that run under Windows and it shifts the focus from consumption to productivity.”

Unlike a number of other districts, ENSC hasn’t been tempted to adopt Chromebooks for their one-to-one program. “They might be cheaper,” Linson explains, “but we’ve been really happy with the Lenovo laptops and don’t want to restrict our students and staff members unnecessarily. We’ve chosen to emulate the real world.”

The latest device purchases have been Lenovo Yoga models with touch screens. Teachers and students are enthusiastic about the flexibility these models offer and Linson reports that the technology department has confidence in Lenovo. “They’re very supportive and accommodating with repairs and listen to our input about elements that could be changed.”

During the initial planning year, six teams – each made up of administrators, teachers, technology staff, and parents -- were created to focus on:

In order to further communication and ensure a coherent program, several people served on more than one committee and the technology director served on all of them.

One of main areas the teams agreed to focus on was the shift from textbooks to digital content. “We did not get rid of books entirely,” says Linson, “but we only continued to buy novels and textbooks that were required for AP classes.” East Noble has adopted Canvas as their learning management system. They subscribe to some content – BrainPOP and Big Universe in the elementary grades, for example – and tap into content licensed by the state of Indiana, but the bulk of the digital curriculum is created in-house.

According to Linson, “It was hard at first but, with help from a great curriculum director, teachers learned how to support the standards with digital content and discovered that what’s out there on the Internet is so much broader and deeper than what they can get from a textbook; textbooks usually just skim the surface.” 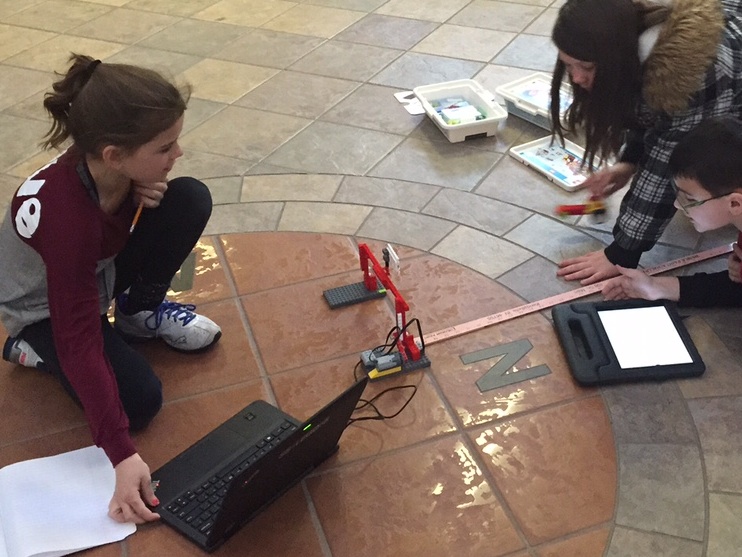 Technology coaches at each of the schools help with this process and collaboration is encouraged through meetings and planning periods where teachers share what’s working for them. The resulting learning environment is described as follows at the district web site:

"When walking into a classroom, you will see students working in small groups, listening to instruction in a traditional manner, collaborating on projects, investigating content of interest, reading, writing, using video, and many other instructional techniques with and without the use of a technology tool. Teachers are engaging students in lessons that are rigorous, relevant, and prepare them for a successful future."

The Keys to Success

East Noble School Corporation has been recognized as a Project RED Signature District and many educators visit each year to see an exemplary one-to-one program in action.  Linson summarizes some of the most important things she hopes these visitors take away from the experience.

There are approximately 3700 students, Pre-K-12, and eight schools (five K-6 schools, one 7-8 middle school, one high school, and a small alternative school.)

East Noble is a Project RED Signature District and a member of the League of Innovative Schools.

Superintendent Ann Linson was chosen by NSBA in 2012-3013 as one of  “20 to watch” and selected to attend the Future Ready Superintendent summit at the White House in November of 2014.

In the years since initiating its 1:1 program, the district’s graduation rate has risen from a little more than 80% to over 92%

The entire district is 1:1.

K-4 students work with iOS devices and students in grades 5-12 with Windows laptops from Lenovo.

The Lenovo models include ThinkPads and Yogas with touch screens.