When people hear about huge 1:1 initiatives like New Caney ISD’s 1:Vision – which involved the deployment of 10,772 Chromebooks in one year for students in grades 3 through 12 – they usually say things like, “How in the world did they do that?” For NCISD, the answer is amazingly simple: a smart plan, early and ongoing professional development, student input, and effective allocation of resources.

“Our journey started almost four years ago,” says John Emerich, executive director of administration. “We always had 1:1 in the back of our minds; it’s the gold standard districts try to reach.”

A team of administrators visited several 1:1 schools and found a disturbing  disconnect between the technology and the curriculum. To ensure that NCISD did not have that same problem, the 1:Vision team decided to start preparing teachers well in advance so that they’d be comfortable integrating technology and doing project based learning (PBL).

NCISD worked with Connected Consulting, which bases its work on the Abilene Christian University 1:1 program, to start training a cohort of motivated teachers who were recommended by their principals. The teachers learned about PBL and went back to their classrooms and began using it. As word got out, says Jeannie Reed, director of digital learning, “more and more teachers were asking to be trained. Today, about 75 percent are trained to do PBL.”

“Training teachers well before we got devices was the right thing to do,” says Emerich. “They were so hungry to do different things with instruction.”

Choosing the Device – With Help from Students

Once teachers were on board, it took another six months to choose a device. The 1:Vision planners asked students about their preferences and were surprised by what they discovered. “Their biggest needs were that the device had a keyboard and would allow them to use the Office suite,” says Emerich.

Several companies were beginning to release Chromebooks but they hadn’t become as popular as they are today, according to Dustin Hardin, director of technology. But when NCISD realized what a Chromebook could do – not to mention its attractive price point – it became a strong contender. In addition, the NCISD digital learning staff was planning to use Google Classroom.

According to Emerich, “For the same amount of money, we could get two to three times the number of Chromebooks as laptops. Instead of just doing 1:Vision at the middle school level, we were able to do grades 3 through 12 all at once.”

Through funding provided by federal and local sources, including the 2013 Tax Ratification Election, NCISD has leased the computers for three years and will upgrade to newer versions at the end of the lease. Emerich says schools are often reluctant to finance large purchases because it hasn’t been done before, but he and his team believe it was the right way to go.

Tech Specialists in Every School

Once the district selected Chromebooks, the next hurdle was professional development. At the time, the instructional technology department had three people to handle 14 campuses. There was no way the department could train every teacher in a timely fashion, so the 1:Vision team came up with a brilliant idea. They asked the Board about moving current librarians into media specialist positions and hiring paraprofessionals to oversee the library’s day-to-day tasks like checking out books and updating inventory.

In the summer of 2014, while the technology department was getting the devices ready to deploy, the media specialists received online and face-to-face PD. When teachers came back that fall, there was a media specialist in every school to offer whatever they needed: one-on-one sessions, coaching, co-teaching, help finding resources, and so on.

“Some librarians were resistant to become media specialists,” says Emerich. “They thought we were getting rid of libraries but that was never our purpose. Now it’s turned into a positive thing. The media specialists can go in classrooms and help with implementation. It’s probably the most important factor to success.”

To become a media specialist, the librarians had a year to complete their K-12 technology certification. The district offered classes after school, or they could take classes on their own. They had to present a lesson in which they integrated technology to a group that included the digital learning department, principals, and the executive director of curriculum. “We also had them take the learning.com assessment to assess their technology skills; we wanted them to be in the advanced category,” says LaSonya Cobbs, elementary instructional technology specialist.

To continue improving their skills, the media specialists get ongoing professional development, attend trainings at the regional center, present at tech conferences, and use social media. In addition, they meet as a group to share their ideas and collaborate. “The media specialists get together twice a month for training. They are our liaison to the campuses,” says Cobbs.

NCISD leased 10,772 Intel-powered Dell Chromebooks for three years. Last summer, they hired eight interns (current NCISD students and graduates) who were paid minimum wage to unbox the devices, do inventory, and get them ready to deploy.

“There was a lot of good will because we hired students, and we couldn’t have done it without them,” says Emerich.

Hardin agrees, saying that the fact that they were using Chromebooks made it possible to deploy them all in just a couple of weeks. “Another device would have required imaging and management, server upgrades, new servers, and possibly additional tech staff. The Google Management Console allows us to push down policies really easily.”

Classrooms in grades 3 through 5 have charging towers that were filled with Chromebooks when the children started in August, 2014. High schools received theirs during the second week, and middle schools during the third week. Students came to the library by classroom, scanned their ID badges, and received their device. Then a team of curriculum and digital learning staff members helped them log onto the network and reset their passwords. After that, they went back to class and began using them. 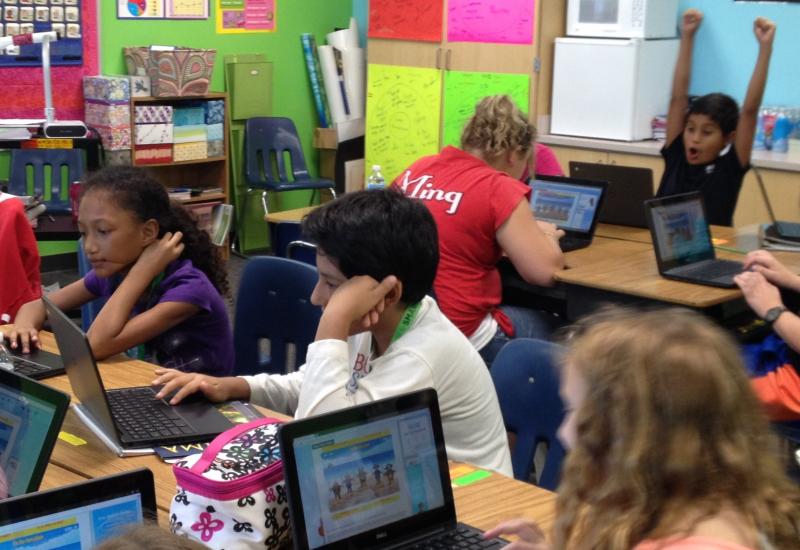 “The opportunities that have opened up for our children have been fantastic,” says Jeannie Reed. “Before the 1:Vision, our students had one or two computers per class. Now, students just reach over, grab the Chromebook, and start using it. It’s seamless.”

Reed and Cobbs say that PBL offers a plethora of benefits, particularly because it appeals to different learning styles. They like that students have choices to demonstrate their learning.  “We have teachers doing Google Hangouts and connecting with experts and authors on the other side of the world,” says Reed. “Our dual-language students do Hangouts with their pen pals in Puerto Rico. It has opened their worlds.”

Especially for the economically disadvantaged students who rarely go more than 20 miles from their homes, having Internet access and doing virtual field trips is a powerful thing. Thanks to 1:Vision, students are interacting, classrooms have been rearranged into clusters of desks or tables, and everyone is buzzing with ideas.

New Caney ISD (NCISD), the fastest-growing district in the greater Houston area, serves nearly 13,000 students. Student enrollment has increased by 30.2 percent in the past five years.

All NCISD schools achieved the Met Standard seal of approval from the Texas Education Agency and four campuses also earned one or more coveted distinction designations for the 2013-2014 school year.

PreK and kindergarten have Dell Chromebooks and Nexus Android tablets in their classrooms. Grades 1 and 2 share Chromebooks. Grade 2 also shares Nexus tablets. The ratio in these early grades is about 1 device for every three children.

Grades 3 through 5 have 1:1 Chromebooks that they leave at school.