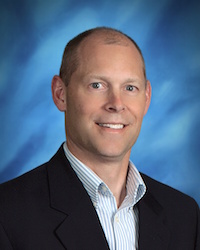 Tim Hall is a busy man these days. As Project Director for Michigan’s Technology Readiness Infrastructure Grant (TRIG), Tim oversees multiple statewide projects regarding this innovative grant: often using his four-wheeled office as he drives from one end of the state to the other, making sure everything is on track.

“I have operational oversight over the entire grant,” Hall says from TRIG’s offices in Lansing after a recent business trip. “Our grant was structured so that we currently have seven different statewide projects. For each project—or ‘activities’ as we call them—we have a project manager. I oversee each of those activities, I attend planning meetings, and I make sure we’re all on target to get the work done and that we’ve accomplished everything we set out to do. I’m the guy who gets to be traffic cop in some ways: just keeping that wheel moving.”

Currently in its second year, TRIG was intended to develop or improve the technology infrastructure of Michigan’s school districts in preparation for the planned implementation of online growth assessments. This includes building a statewide interconnected network to support reliable unencumbered access to online assessments; establishing collective purchasing contracts for learning devices and online content; and assisting educators in planning and implementing the best practices and technology required to support the next generation of assessment, teaching, and learning.

Legislation mandates that by Spring of 2018, all Michigan school districts need to be online with their statewide summative assessments. This legislation, according to Hall, is loose in its interpretation of exactly how that is accomplished.

“Some would interpret that as all of our districts having suitable devices,” Hall explains, “but we sat down and looked at what we really needed, and we realized that an even bigger task than providing devices was ensuring classroom and network readiness. More than putting laptops and learning devices in the hands of students, we had to make sure teachers and administrators were prepared to deal with the flood of data that will come after testing. There are a myriad of issues that school districts have not looked at or —because of complexity—otherwise put them off. Now they’re having to face these issues on a real significant basis, and we’re helping them to become prepared, because the clock is ticking.”

While most state grants are either awarded directly to a district or to an intermediate school district, the State of Michigan—with the formation of TRIG—created a completely new model. Roughly one-third of the monies are distributed directly to local districts, with another third financing statewide activities, and the final third earmarked for building Michigan’s ambitious statewide education network.

“We didn’t want to see the funds fragmented in a manner that might not be effective,” Hall explains. “Fifty million is a lot of money, but spread out: not so much. We had to be wise and intentional, especially when allocating funds to our seven activities, which impact all school districts across the state. We recognized that since we had a different model, we could manage things differently too. One thing we did was to bring in groups of people throughout the state who are active on the school district level to help advise on how to build and manage the activities, which is very different from how things were done in the past. Decisions were not made by a group of people at the bureaucratic level, but by people from the field in local districts based on what they see happening on a practical level. In my estimation, that’s why we’ve been so effective.”

Michigan’s statewide device purchasing approach was born out of what Michigan had seen done in other states: both what worked and—most importantly—what didn’t work. TRIG, quite rightly, felt that if purchasing could go statewide, Michigan school districts would enjoy lower pricing from manufacturers. Through coordinated device purchasing via a collaborative statewide bid process, districts were able to purchase 57,000 devices during the grant’s first year: saving 9 ½ million dollars over the education list price in the process.

As TRIG went into its second year, device selection increased from nine to 14 learning devices. Desktop computers were added to TRIG’s list, for instance, to accommodate computer labs and online testing, based on requests from local advisory committees.

“We facilitated 147,000 units this year: that’s almost three times the amount from last year,” says Hall. “It’s way beyond our expectations. The 2014 Device Purchasing Window ran from April 23, 2014 through July 31, 2014. Nineteen devices, plus accessories and upgrades, from six vendors were available through the 2014 TRIG bid. We far exceeded our goal of having 70,000-100,000 devices purchased. We knew we’d see an increase, but we never expected that. And—that said—we don’t anticipate that these numbers will go down any time soon. We’ve seen the prices of devices continue to drop dramatically and—as that trend continues—districts that couldn’t purchase devices before will now be able to afford them. In fact, every district in the state could start moving toward a 1:1 environment.”

In addition to the deep discounts obtained, incentive funds were set aside to be distributed based on device purchases by districts. According to Karen Hairston—TRIG Project Manager in charge of Device Purchasing—$5 million in incentive money was allotted in 2013, with $7 million allotted in 2014. In 2013, only mobile devices such as laptops, notebooks and tablets were eligible for incentives. At the end of the purchase window (once all district purchases were verified against vendor reports), the $5 million was divided by the total number of mobile devices sold. The resulting incentive payments came out to be $98.71 per device, with districts receiving their incentive payments as part of their State Aid checks.

In 2014, though, this process played out a little differently.

“We had $7 million to work with in 2014,” explains Hairston. “And it was decided that, while mobile learning devices would still receive a ‘full incentive,’ we would also provide an incentive for desktop computers, but only at 50% of the incentive for mobile learning devices. The Michigan Department of Education initially wanted, in that first year, to really push mobile learning devices since—for districts moving to 1:1 environments— its going to be tablets or laptops that truly integrate technology into their instruction on a daily basis. But some districts, we found, were still buying desktops for online testing.  So the incentive amount for the mobile devices came out to $51.05 and the incentives for the desktops were $25.53.  This time out, the checks were sent out by Copper Country ISD as a standalone amount rather than being included with a State Aid payment. Those checks were sent out the week of Thanksgiving!”

The only caveat was that the incentive monies had to be spent in areas of education technology. The money could be used to buy more learning devices, to upgrade network purchases, for purchasing more networks, even for education technology-related services such as hiring a technology coach for teachers to learn how to integrate technology into instruction, for instance.

“Technology directors loved it,” Halls says. “Especially when the incentive was used to move districts toward online testing readiness. All devices purchased must function as testing devices, and those specs tend to be pretty low, so most of the devices bid far surpassed those specs. But those devices, for the most part, need to be used for the rest of the school year for instruction. We don’t want them just sitting on a shelf somewhere brought out in the last eight weeks of the year for testing. They should be used for the entire school year to improve student learning.”

A dedicated Bid Specifications Committee was formed to study what features and capabilities were most important to look for when choosing devices based on the needs of students and educators. Based on the group’s research, the committee put together general bid specifications—noting required screen sizes and aligning with testing device requirements set by the Michigan Department of Education, for instance—and vendors and manufacturers would respond with bids. Any devices that did not meet the bid specifications were disqualified, so in the end every device awarded and available for purchase met or exceeded the minimum online testing device requirements. The process is, according to Hall, very rigid: including a number of points—from price to feature sets—to accommodate financial constraints, technical and network practicalities, as well as curriculum and testing needs, to reflect the whole gamut of how the devices would be most effectively utilized.

These incentives were greeted with a sense of “surprise” mainly, Hall surmises, from a bit of healthy skepticism.

“I had some people that didn’t believe the incentives would really come through,” Hall says with a laugh. “They’ve lived through this sort of thing before in education: where they waited for the check to show up, and it never did. But when they saw that this was the real deal—that they really got a check if they bought these devices (not to mention at a huge discount)— they realized it was a really good thing! I received a call from a superintendent last year that received a check for $200,000, and didn’t know what it was about. I asked, ‘Do you often get checks for $200,000 that you don’t know what they are for? It’s your incentive check for devices!’ He simply never thought they’d get it. I offered to take it back, but he didn’t take me up on it!”

Aside from device specifications and competitive price points, another major requirement asked of vendors was regarding professional development resources. It was deemed a critical “value add” in that, while devices themselves are important, if teachers and students don’t have the skills to fully utilize these devices, then TRIG will fail to achieve its ultimate goal of improving student achievement. Luckily, not only have vendors provided comprehensive professional development resources, but school districts have embraced these resources as an integral part of their device purchasing: viewing them as essential educator training that is both professional and easily coordinated.

Also vital, Hairston adds, is training for those with the most invested in education: the students.

“You’ve got your devices, you’ve got the bandwidth, you’ve got your network set up, but you have to be sure that the kids have practice doing assessments online: learning the mechanics of working the test, whether it’s drag-and-drop or understanding directions. You have to make sure that both students and teachers know how to implement online testing with their devices. That’s another piece contributing to readiness.”

For TRIG, success is measured in multiple ways. First, there is the high number of test-friendly devices that have been purchased. Another is the $34.8 million savings over education list pricing during TRIG’s last purchasing cycle. Then there is the $7 million incentives sent out to school districts for education technology spending.

“That’s money that will go right back into improving student achievement,” adds Hall. “Not only are we putting devices in the right places, but we’re also saving districts huge amounts of money. In TRIG’s main office, we mapped out all of the districts that had utilized the bid and how much they saved and it covers almost the entire state. Our school districts measure success by how much money they can put back into instruction: and that doesn’t even include the money they’ll get as an incentive. If I was a district leader, that would be the icing on the cake!”

In addition to receiving $21,219,510 directly through participating in TRIG, the school districts also realized $16,999,915 in savings for services, devices, and professional development:

Check out the Infographic for this Success Story