The Houston Independent School District (HISD) is about to enter the third phase of its phenomenally successful 1:1 PowerUp initiative, named for its ability to “power up” all 282 district schools and empower teachers to create a rich learning environment filled with project-based learning, 21st-century skills development, and coursework aligned to individual aptitudes and interests.

HISD approached PowerUp planning in a well-thought-out manner, starting with a conversation about the district’s teaching and learning philosophy and methods. “It’s not about devices; it’s about education,” says Beatriz Arnillas, director, IT – Education Technology. “We wrote a pedagogical framework well before we started talking about a device.”

Although the IT department managed the initiative, it was an inter-departmental project from the start. No decisions were made without input from the six different departments: instructional technology, curriculum, professional development, device adoption, school support, and networking and infrastructure. Arnillas believes that this unity is a key reason for the success, saying, “No matter what we did, if our principals didn’t buy in and our teachers didn’t get behind the work, it wouldn’t be successful.” 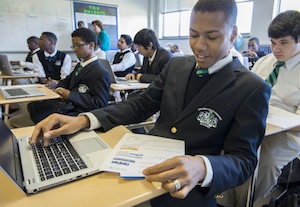 The team knew that they couldn’t just buy devices, drop them off at the schools, and wash their hands of it. Instead, they planned it as a three-year journey:

Year 1: Teachers were given the freedom to explore and figure out how to integrate the devices into their classrooms. Many of them stayed in the Substitution (S) phase of the SAMR model, but some explored a lot and were very innovative. The measure of success for this year: Just DO It.

Year 2: The goal here was to double involvement. (If four teachers were transforming their teaching in year 1, the district hoped to see eight do so in year 2, etc.) Teachers were encouraged to adapt and integrate more fully as they began thinking about tech integration differently: What will technology let my students do that they couldn’t do without tech so they are more active in their learning? The measure of success for this year: Increase breadth and depth.

Year 3: This year will be about more specific metrics and a higher percentage of student engagement. The district is now looking for more student-centered instruction. The measure of success for this year: Moving from “adoption” to “transformation (or, in SAMR’s terms, to Modification and Redefinition). The communications department is instrumental in district efforts to ensure that teachers, principals, parents, and the community understand the expectations.

When it was time to roll out the devices in 2013-14, HISD started small, with 11 schools in year 1. The district worked with Netsync Network Solutions, a VAR located in Houston, to handle laptop imaging, configuring, and deployment. Teachers received their laptops in the fall and had an entire semester to do PD, play around, and work with their peers before the students received their devices in January.

“When we moved into year 2 and added more schools, we had the support of teachers from the previous year, who said things like, ‘I had the time and forum to become comfortable,’” says Christina Masick, general manager, information technology. In year 2, (2014-15), 21 schools received devices. Next year (2015-16), 13 more schools will go 1:1. At that point, all high schools—65,000 students—will have devices.

Both Masick and Arnillas say that, from an educational perspective, it was important that the device allowed students to create authentic work projects. “When I want to produce something, a tablet is not the right tool,” says Arnillas. “With a laptop you have apps, Internet, and local software. Our laptops have the complete Microsoft suite and a local drive. Students can be productive even without Internet access.”

In addition, the district wanted a device with less moving pieces internally since devices get knocked around. “Less moving parts equals less damage that we’d have to pay for,” says Masick.

HISD is a Windows district, so they wanted Wintel devices that the tech staff could control, manage, and network. Since the IT department would be stressed to the limit, it made much more sense to let them standardize one process and continue to focus on safety, security, rigor, and consistency.

After testing various products, the team chose the HP 9470m laptop and is very pleased with it. Teachers and students have the exact same model.

Because of its PowerUP initiative and the work that’s gone into it, HISD is becoming a national leader on hot-button topics that districts are grappling with. “In this new world of interconnectivity, we wondered if parents and districts knew the trail that’s getting out there on our students,” says Arnillas. “They are graduating with a virtual reputation already in place, whether they know it or not.”

When HISD started PowerUp, it was already using Edmodo and OneDrive but there was no learning management system (LMS) in place. The district knew it needed to adopt an LMS and, once it began investigating the options, quickly found that interoperability was a key issue – both to avoid asking students to use multiple logins and IDs and also because, when you’re trying to encourage teachers to experiment and integrate technology, it’s a lot easier to have everything simple and streamlined. As the district learned more about the issue, they wrote a paper on interoperability and are working with edtech vendors to expand interoperability standards.

Other districts were invited to help make the rubric more robust, and Commonsense Media published a version of the rubric at graphite.org. “With the new rubric, vendors can rate their own apps for privacy, safety, and security,” says Arnillas, who says they’ll keep using the rubric to raise awareness among teachers to understand the terms and conditions of the tools they are using and not put anyone in danger.

HISD is the largest school district in Texas and the seventh-largest district in the U.S, with:

Recent data shows that the number of HISD students earning college credit on AP exams and posting top scores on the SAT has never been higher. The district’s graduation rate is also at an all-time high.

The laptops are preconfigured by NetSync with Absolute Software’s CompuTrace, filtering software, and academic and productivity tools such as the Microsoft Office suite products, selected by HISD.