Going 1:1 with Chromebooks in North Carolina

Google Apps for Education and other cloud-based resources are crucial to learning in North Carolina’s Union County Public Schools, so it’s not surprising that the district chose to place rugged Lenovo Chromebooks in the hands of all students in grades 6-12.

Union County Public Schools in Monroe, North Carolina, started planning its 1:1 program six years ago with a series of pilot tests across the district. “We tried out several devices with teachers who had the skills to get a feel of what a 1:1 class would look like,” says Scott, lead instructional technology facilitator. “We then set up pilots in middle and high school classrooms to work with students and get their feedback as well.”

Based on those tests, UCPS decided to start its full-scale 1:1 rollout in the middle schools because classes are on the same hall and students have the same teachers throughout the day. For the first few years, students received a Dell 2100 netbook; thanks to its low price point, the district could spend money improving its professional development and infrastructure at the same time.

Once the middle schools were set, the high schools came next. At this time, the district decided to purchase Chromebooks instead of netbooks (see below) for all students in grades 6-12 and laptops for all their teachers. Once the Chromebooks were deployed, 10,000 refurbished netbooks from the middle school were put onto carts for the K-5 classrooms. Students in grades 3-5 now have one-to-one access; although the netbooks remain on the carts at school every night, each student uses the same computer every day for class.

Making the Switch from Netbooks to Chromebooks

In 2011, UCPS started using Google Apps for Education. “We wanted to utilize the power of cloud-based computing, so we began doing staff development on classroom management and organizational skills,” says Jacumin. “Google provided scalable, affordable cloud-based offerings and gave us storage for students.”

With teachers and students sharing curriculum in Google Apps, the type of device became less important. “We’re rapidly moving into a browser-based environment,” says Jacumin. “Today, the number-one piece of software we utilize is a Web browser. Outside of software or apps that are specific to a job practice, it’s all cloud-based.”

“I make sure we can support whatever we choose today and what we will choose in the future,” says Tony Burrus, chief technology officer. “Our middle and high schools had 15-meg connections so we had to do infrastructure upgrades here at the datacenter and out at the schools. We gutted everything and increased the connections.”

There’s wireless at every school, and an access point in every middle- and high-school classroom. (Elementary schools have one access point for every two classrooms but they will soon have one in every room, too.) Burrus says the one thing he’d do differently is to use a dual-band radio instead of a single-band radio when hanging access points. He’s in the process of replacing the single-bands now.

A couple of year ago, to try and offset the cost of repairs, the technology department turned an empty space into a fix-it depot with 360 connections. They use the facility to image Windows devices and repair broken machines. “Three of my guys are Lenovo-certified and we get paid to make user repairs,” says Burrus. “The money goes into the general tech fund.”

Do Staff Development Up Front

Before the rollout, Jacumin and his team put on what he refers to as the Google Traveling Expo. “We went to every school in the district and let the teachers have hands-on experience with the Chromebooks we were going to give the students. The purpose was to dispel the myths people had heard, such as, ‘You can’t do this with a Chromebook.’”

Before the Chromebooks were handed out, teachers had already been using Moodle and other digital materials. Still, Jacumin didn’t want to force an agenda on anyone. “A lot of the research shows that teachers don’t want to teach a new app for each exercise. We believe Google Apps for Education is the number-one Web 2.0 tool for both teachers and students. It takes some training but you can do it in a closed, safe domain with one single logon. You get a trouble-free platform that makes collaboration easy.”

UCPS chooses a teacher representative from every hall to receive extensive staff development that includes touring other schools. They implement what they’ve learned in their classroom and a new team gets chosen the next year. “Eventually, we’ll touch every teacher. We will bring everyone in and give them the ability to be an expert, not an outlier.” 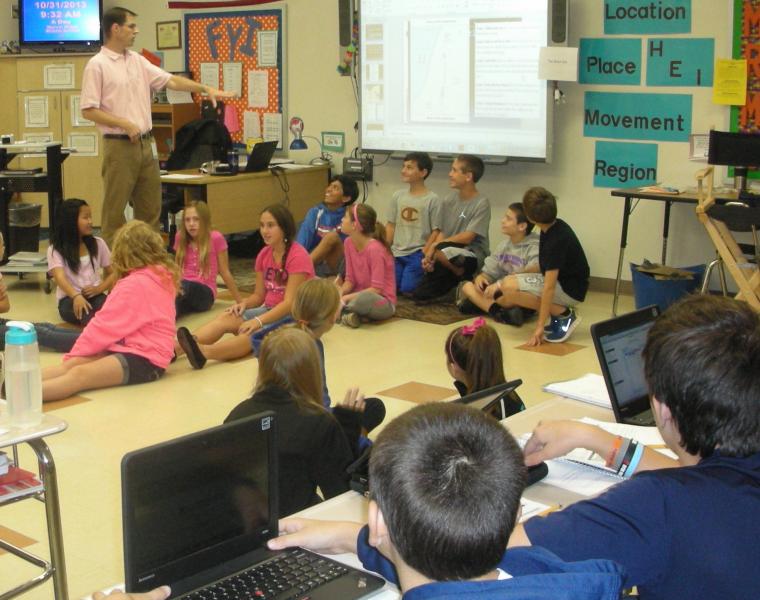 Mari McTamney, a ninth-grade math teacher at Weddington High School, was part of the original 1:1 pilot; today, all of her students have Chromebooks. “Teachers use technology in a variety of ways,” she says. “What’s neat is finding your comfort level. Some make it optional; some use it a few days a week.”

McTamney loves how technology enhances creativity. “When I assign a project, I give them options. Some students use digital presentations; some use construction paper; some use Prezi or Animoto or other cool tools. They take it and run with it. You learn so much about them. Students use their Chromebooks for individual and group work, and McTamney assigns them to watch tutorials and videos on Khan Academy and IXL. “I try new things all the time,” she says. “It’s a lot of fun.”

She uses an online textbook – although a paper one is also available – and enjoys being able to scan worksheets to add to her Moodle for students to complete. But putting technology into her lessons wasn’t always so easy. “When I was first asked to pilot test I was intimidated. Technology wasn’t my strong point but I like challenges. You and your students learn and grow together. The key to success is classroom management. If you don’t have a good grasp on that, it won’t work.”

Jonathan Harbin, who teaches AP language and composition at Monroe High School, loves that all of his students are on the same playing field. “It’s a huge plus. It expanded the classroom. With Google Docs, students email me at night.”

He explains that using Google Presentation forced his students to collaborate—in a good way. “In the past, I’d bring in laptops and form small groups. Typically, one student typed the presentation while the others told him what to do. With Google Presentation, everyone has an equal role. Some students work on slides while others do research. A few groups even met online at 10pm to keep working. They were that motivated.” 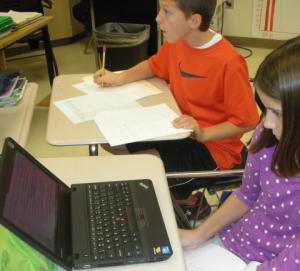