The 1:1 initiative at Leander Independent School District did not start out with the goal of providing one device to every student. Technology funding had long been an issue for LISD -- one of the fastest-growing districts in the country, with a total of 36,000 students and two or three new schools being built each year throughout the 1990s and early 2000s. Thanks to a bond, the district had purchased a lot of desktops between 2007 and 2010, but, according to Sarah Martinez, senior director of information technology services, “Funding for capital replacement was frozen in 2010-11 and much of our equipment from 2007 was aging out.”

Luckily, the LISD Board of Trustees allocated funds to replace some devices. Administrators knew they didn’t want to just replace desktops with desktops, so Wendy Jones, director of technology curriculum & innovation, and Tracy Nolen, director of client services, led a team of curriculum, IT, administrators, and staff through an 18-month collaborative process that focused on the answer to this all-important question: What do we want our 21st-century classrooms to look like?

Collaborating to Select the Technology

The team gathered feedback from principals, teachers, parents, and administrators, and quickly learned that the teachers had specific preferences. “Our secondary-level teachers told us they wanted a high density of devices so that students could have access at all times, so we started investigating what it would take to get class sets,” says Martinez. They discovered it would be more efficient to have devices traveling with students than the other way around.

In terms of the ideal device, different subject areas had different needs. Math teachers wanted a touch screen to do math; science teachers requested devices that could run Java and Flash for simulations (ruling out iPads); and English/language arts teachers wanted keyboards so students could type.

In order to meet all of these requirements, LISD chose the Lenovo Yoga 11E Thinkpad, a convertible Windows-based laptop. “With these devices, we need very few other computers in labs or anywhere,” says Scott Monroe, executive director of information technology services. “Our students can be consumers as well as producers.”

In the younger grades, LISD knew that computer lab visits and mobile carts were not leading to the types of learning they wanted to see, so they decided to provide a variety of devices—Chromebooks, iPads, laptops, and desktops—to each classroom. The earlier grades will be more iPad-driven, but by fourth and fifth grade the students will be using Chromebooks and laptops for research, writing, composing, and creating.

“Our focus has been in training students on function, not device,” says Martinez. “By aggregating what we had in place throughout the district and redistributing it to the younger grades, we are preparing them for their secondary experience and for life.”

The student fee for the Lenovo is $70 per year. That amount is reduced by 50 percent for free/reduced lunch recipients, and LISD is working on a program to provide scholarship money if $35 is too much. Parents pay the fee via an online portal and can add $5 or more to go toward the scholarships.

In addition to hosting parent meetings on every campus describing what would happen and welcoming concerns and feedback in early December, there was also a website for parents to get information and express concerns. In January, the schools held additional parent meetings to provide parent training and address concerns that had surfaced the previous month. “We talked about digital citizenship, the impact on education, and campus expectations,” says David Ellis, principal of Henry Middle School, one of the pilot campuses. “We talked about parenting in a digital world and discussed how to monitor usage and keep children safe. Parents rotated through device stations and it was very well received.”

Three Pilots Get the Convertible Laptops Into Students’ Hands

In the fall of 2014, three secondary school campuses were chosen to do 1:1 pilots. The campuses represent a mix of economics conditions, geographic locations, state assessment scores, and amount of teachers who had voluntarily done advanced training. In January, the pilots began.

“We are so excited to be selected to pilot,” says Tiffany Spicer, principal of Leander High School. She handed out the Lenovo laptops to 9th graders and hopes to pilot additional grades next year. By learning alongside her teachers and students, Spicer is ensuring that everyone is in this together. She and her team, which includes the dean of instruction, an instructional coach, and two tech facilitators, collaborated on what teachers needed and used Google Apps to create lessons on classroom management and lesson building. They worked on these with teachers before students got their devices in January so that teachers could hit the ground running.

Spicer says all three pilot campuses approached the 1:1 in similar ways but with their own flare. “We wanted to build our comfort level and make it a smooth transition. Our teachers had a lot of PD and planning from October through the second week in January.”

At Henry Middle School, sixth-graders received their Lenovos in first period and participated in a mini conference the rest of the day, reviewing digital citizenship and learning how to set up their devices, Google Calendar, Google Classroom, and other tools. “It wasn’t just about the Lenovos because some students used their own devices,” says Principal Ellis. “We deliberately trained how to use the tools, and on day two were using the devices instructionally. It was a very successful kickoff.” 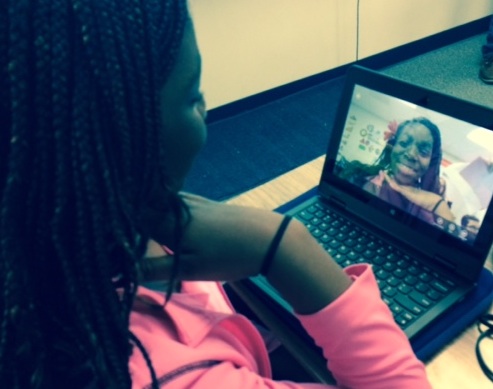 Canyon Ridge Middle School also piloted the devices with sixth-graders. “We have been amazed at the responsibility these young students have shown,” says Susan Sullivan, principal. “They are very invested in their personal computer and have found that they take much better care of a device if it belongs to them, instead of a general-use computer.” Sullivan says her students are busy and engaged, becoming much better researchers and improving their keyboarding skills rapidly.

At the same time, the teachers have become more efficient. Sullivan says they use a management system that has been a powerful tool for instructional support; it lets teachers be very creative in lesson design. “Our science students recently did a unit on alien rescue in which they learn about the planets. They were given a couple of different aliens with specific characteristics and had to figure out which planet the alien can survive on. This year they found an alien website through the University of Texas and did research and developed graphic organizers for each planet.”

Sullivan says she is modeling herself after Spicer, figuring out how to learn the tools alongside her teachers. “I set up a Google Classroom in a faculty meeting and we all used it, and I plan to do my teacher evaluation portfolios through Google Classroom next year,” she says. Recently, her teachers brought their devices to a faculty meeting and shared the ways they use Gradebook and Attendance. By the end of the meeting, everyone was using those tools.

“We wanted to see our classrooms transform and it has happened so quickly,” says Martinez. “People on the three pilot campuses talk about collaboration, students owning their learning, and teachers letting go of control in a natural way.”

Martinez says that the district is beginning to build teacher leaders among the sixth- and ninth-grade teachers who will promote and support other teachers as the pilots expand. A key lesson, she says, is that it’s important to build structures that will support teacher-to-teacher collaboration and break down the institutional barriers schools typically experience.

“My friend Mark would say he was old 13 years ago,” laughs Ellis. “He’s a math teacher who never used a computer. The first day he got his device, after he had done training, he was so excited. Another teacher I would never have guessed would step out of her shell has taken the lead. She’s near retirement age and has been so innovative, developing a unit in which kids were self-pacing. It’s amazing to watch different teachers shine.”

One way LISD helped teachers embrace this digital evolution was by asking them to think about how technology could assist their instructional processes. “We had teachers figure out how the tools can help them and to not just use tech for tech’s sake,” says Ellis.

Like many other forward-thinking districts, LISD is turning its students into technicians with its Tech Genius Bar, located just outside of the Leander High School library. Students and teachers submit work orders to the Genius Bar twitter page, and the “techsperts” work with tech facilitators to handle whatever they can. “Some of our teachers and librarians went to Boston to see models of student-led programming and are trying to implement that for next year,” says Spicer. “We are also creating a high school course that will teach students how to fix machines and allow them to do projects like creating interactive webpages for administrators.”

The Genius Bar at Henry Middle School is open before school, says Ellis. “We call our student volunteers the Hawk Squad, after the Henry Hawks. They are very serious about helping each other fix problems.”

At pilot site Canyon Ridge Middle School, the volunteer techsperts create tickets when devices aren’t working. The student brings a copy of the ticket to the library and checks out a loaner, while the techspert moves the device to a tech facilitator who gets it repaired. Students have to apply and interview for the position.

The pilot programs will expand to 9th, 10th, and 11th grades at the high school pilot campus next year, and to all three grades at the pilot middle schools. In January or February of 2016, LISD hopes to launch 1:1 initiatives for 6th and 9th grades at its other 10 secondary campuses, and then scale those programs up the following year.

“Our decision to pilot was great. We have stories to tell and we can help. Zero devices have been lost or stolen, very few have broken, and everything has been covered under warranty,” says Martinez.

Since 2002, LISD student enrollment increased by more than 127%, making it one of the fastest-growing districts in central Texas. Approximately 19% of students are economically disadvantaged. The district has a high STAAR passage rate of 83%, compared with 72% for the state.

Leander’s Mobile Learning Initiative (mLISD) supports the vision that “Leander ISD students are well prepared to enrich our world and excel in a global society” and that “each student is challenged, encouraged, and supported to achieve the highest level of knowledge, skills, and character” in a digital world.

AWARDS: In March 2013, 14 LISD Destination ImagiNation Teams advanced to the state level and the Leander High School team #1 placed first in two challenges. In February 2013, LISD was recognized as a 2015 Architect of Change from E3 Alliance (Education Equals Economics), a collaboration of businesses, schools, and higher education institutions that is working to increase the global competitiveness, economic vitality, and overall quality of life for Central Texas.

Existing devices at the high schools have been laptops and desktops with a few ipads and chromebooks (from Dell, Lenovo and Samsung), but future purchases will focus on the Lenovo convertible laptops.

Elementary schools will receive a mixture of iPads, Chromebooks, laptops, and desktops to drive innovation.