True 21st Century literacy extends beyond the ability to read: it’s the development of essential skills to gain more meaning from life, through effective communication, digital proficiency, and the ability to research, understand, evaluate and analyze information in all its forms.

And there happens to be one place in most every school where different types of 21st Century learning come together: knowledge building, research skills, digital literacy, content creation, and a number of other integrated learning experiences.

Across the country, school libraries are evolving from the traditional book repository model into modern learning commons: transforming from less of a literature “grocery store” into a dynamic kitchen of learning, where students can create most any learning experience imaginable.

Walking into one of the libraries in the Metropolitan Nashville Public School district is like walking into an elegant café for kids, filled with child-friendly furniture, cozy reading nooks, self-checkout stations, ample collaborative spaces, and the palpable energy of learning. The atmosphere is inviting, engaging and comfortable. It’s immediately clear that students are thoroughly engrossed by a learning experience clearly designed with them in mind.

“As part of the changing school-library mindset, a lot of our libraries are adopting more of a coffee shop feel,” says Metro Nashville Public Schools’ Director of Library Services Stephanie Ham. “There are so many people—parents, staff and even principals—that still picture the ‘traditional’ school library they had growing up: where they don’t need technology, or the thought of how the space could work, the kids just need to be checking out books. They don’t see the potential of what a school library could be and what it should be.”

Ham’s primary goal is to ensure that the libraries in her district aren’t simply large rooms housing hundreds of books. This is why MNPS is making significant investments in technology and renovation.

“Since so much instruction is flipped these days, you have to make sure that your school learning spaces are flexible,” says Ham. “All of the furniture is flexible in our new libraries. If it’s not bolted down, it’s on wheels. Chairs are light and can be moved, tables and even some shelving are on casters. It’s about making things not so traditional. By updating the traditional ‘quiet library atmosphere’, we can really change the mindset of what a modern library can be as well. Some of our renovations are running roughly $700,000, while in one middle school, it’s just new carpet, new paint and moving the furniture around. Whatever we do, and on whatever scale, it has students excited, which is the whole point!”

“School libraries should be places where students want to go to learn and explore, and these libraries are what an inviting, welcoming school library should look like,” Mayor Dean said at the event.

The library spaces at the schools were modernized with the addition of second- floor maker spaces: design and invention areas equipped with 3D printers, computer stations, invention kits, and film production equipment, as well as tools for other creative activities. 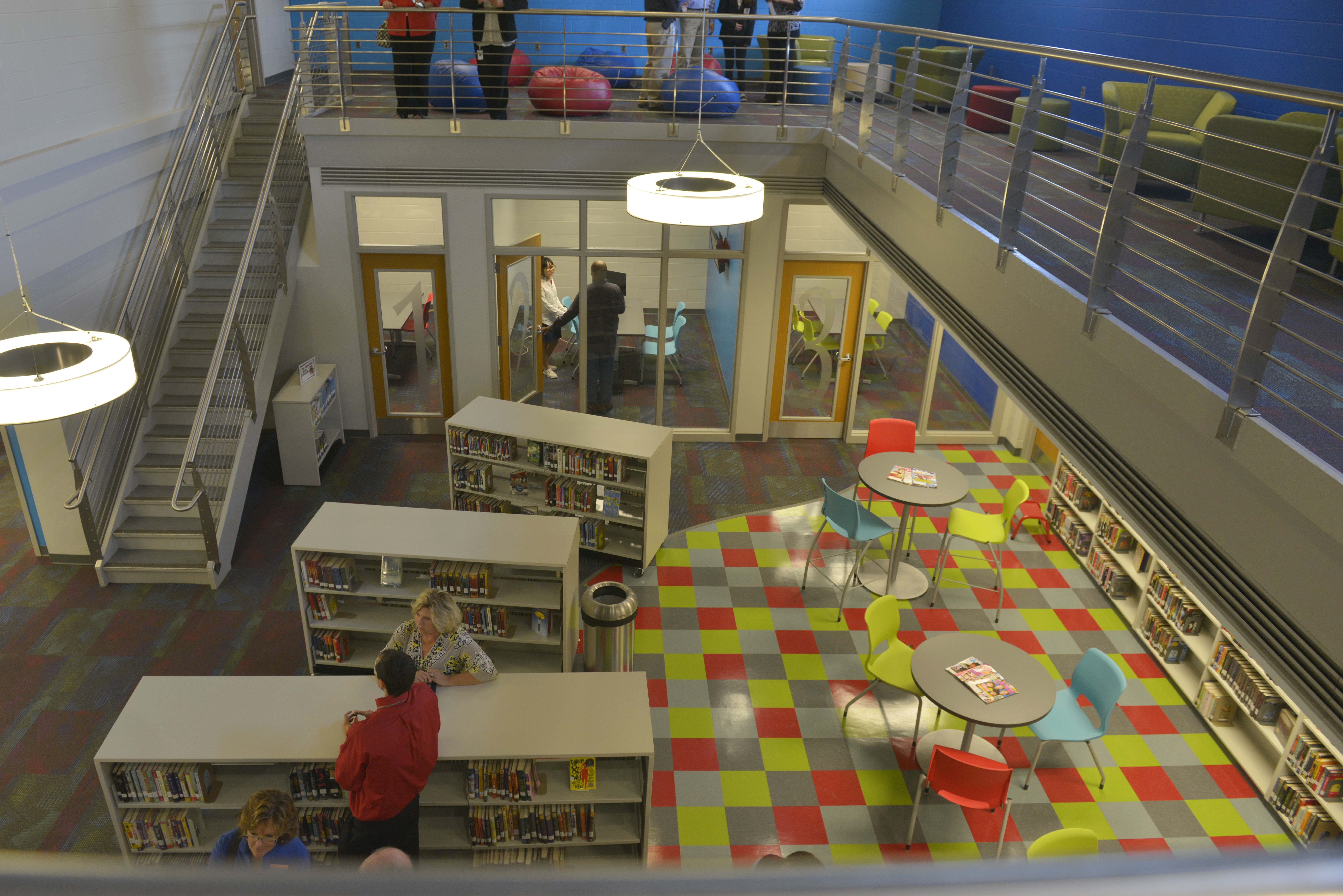 Though maker spaces aren’t necessarily dedicated spaces in all of the district’s libraries, all of Metro Nashville’s elementary school libraries—for example—can accommodate small or large maker spaces. What is exactly in those spaces is dictated by the students, whether that’s technology-related, craft- or science-related or any hands-on creation station.

“While we don’t have any maker spaces built-in to our elementary school libraries, we will have instructional areas or one corner of each library available for hands-on learning,” explains Ham. “But there’s innovation everywhere: we have glass walls outside of one of our librarian’s offices. So the staff put out glass markers, and now the students use the walls as a collaboration area, making notes right on the glass. Nothing is off limits! I believe any library can change regardless of their librarians’ skill-sets. People may be scared to take the leap, but everyone who experiences the full-potential of a modern school library gets really excited about the possibilities that maker spaces can bring into today’s schools.”

The district’s larger high school libraries have two or three instructional areas to accommodate both group work and individual study. There is one space in the secondary librarians’ office, where they’ve put a large table for librarians to collaborate with teachers so that the district’s library spaces aren’t just serving students, but serving everyone.

“Librarians need to be not only experts in books, but experts in content and master teachers to boot,” Ham says. “Books are still part of being a librarian, but not the only part anymore. Changing that mindset of the role of libraries and librarians in schools is a struggle. We’re at a time where roles are shifting, and more and more people are noticing those roles shifting. It’s an exciting thing, but it’s still something we’re dealing with.”

As Director of Library Services, Ham oversees district school library programs from the central office standpoint. She performs evaluations, plans teams for school library redesign projects, partners with the National Public Library, is in charge of the Professional Development plan for her libraries, and oversees the district’s Integrated Library System. She has three staff members and oversees over 130 librarians across 125 libraries.

The Learning Technology and Library Services department helps Metropolitan Nashville Public School to implement technology integration and blended learning within their buildings, ensuring that all of the district’s school libraries have high quality collections and engaging learning environments. The department also has a team of people working with schools on design and build phases. The library services team works with architects on the design of the spaces and then with interior designers on the selections: everything from fabric to furniture to fixtures to floor coverings. Mandatory requirements for district libraries include story-time and rug areas in the district’s elementary school libraries, dedicated instructional spaces, and no rows of wired computer labs.

“The 21st Century library is about flexibility and ample instructional spaces,” explains Ham. “We want our young learners to be able to sit on the floor, sit on different furniture, have areas that facilitate both independent study or more collaborative activities, with large monitors available for small groups of students to hook up their laptops, allowing students to easily talk, share and collaborate in that space.”

Another key aspect of the district’s building and renovation cycle is the Planning and Construction office. The office keeps projects within budget while offering alternative resources and partnerships if necessary. Library Services also surveys students to ask what color schemes and other items they’d like to see in their libraries. While lot of what students ask for isn’t always possible, it’s reaffirming for Library Services to see exactly what students want. Community is also a prime consideration when planning library spaces.

Redefining the Role of Librarians

Apart from evolving the function and expectation of school library spaces, Metropolitan Nashville Public School district is also evolving the role and perception of school librarians. Ham sees the collaboration between librarians and teachers as particularly crucial. The district expects librarians to attend team meetings and usually these meetings are instructional. That way, librarians can better help teachers with their curriculum, and provide the perspective and support to make the learning experience better for students.

“One of our new librarians had a hard time collaborating with our third grade team,” says Ham. “She was saying ‘let me cover science standards. Let’s collaborate on those!’ Eventually, they would co-teach together, and now she’s proven that she’s being helpful and taking stuff off the teacher’s plate. Teachers feel like there is so much to be done that it can be overwhelming and frustrating. But teachers no longer have to cart kids to the school library, wasting instructional time. Librarians can teach in class with eBooks or any number of online resources. All it is, really, is librarians reaching out to teachers—and vice versa— asking what they are studying in the classroom so the library can act as an extension of that, making sure that curriculum stays in scope and sequence.”

In the 1940s, Italian educator Loris Malaguzzi stated: “There are three teachers of children: adults, other children, and their physical environment,” the latter of which—this physical space— is often referred to as “the Third Teacher”.

Today’s libraries are in an ideal position to become this “Third Teacher”: providing a variety of spaces for collaborating, independent study, or socializing. If designed with foresight, creativity and perseverance, these spaces can motivate learners, support collaborative and formal practice, and adapt to the changing needs of the school community. But while a school library or media center can take on multiple incarnations, a modern learning environment must feature open, inviting and stimulating spaces so that students are fully engaged in their learning. This helps to facilitate a participatory learning culture and build inter-disciplinary real-world problem solving capabilities.

But where should today’s librarians and administrators even begin when considering updating or completing renovating their libraries?

“My advice?” Ham says when asked what she would share with other schools looking to take on this challenge. “Dream big. You can always be brought down from that. In one renovation, for instance, we wanted a glass door that could move but we couldn't afford that. We talked about restaurants that have large windows for fresh air. We looked on Pinterest, looked online, and asked questions on Twitter about renovations. We finally settled on an attached classroom with pull-down garage door. Don’t be afraid to ask what other librarians have done: you don't have to reinvent the wheel! Above all, if you know what your students need—and you keep that at the center of everything you do—you should be fine!”

Metro Nashville Demographics (as of 2014)

Support for the K-12 Blueprint provided by the following